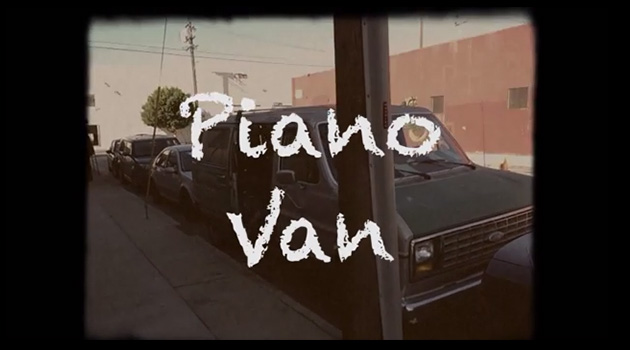 A guest post by Jeff Feuerzeig, director of the very marvelous documentary films The Devil and Daniel Johnston and Half Japanese: The Band That Would Be King, about Piano Van his new Super 8mm music video project with musician and author Chris Stroffolino.

FEBRUARY 2013, LOS ANGELES: It’s 5pm on a lazy Sunday afternoon and I’m riding my bike home through Silver Lake Junction when I hear someone singing his heart out and playing piano. I think to myself, “This sounds eerily like Daniel Johnston from the early Stress cassettes.” The music fades as I pedal onward. “Hmm… is this as great as I think it is?” I spin my bike around and follow the music to see where it’s coming from. Lo and behold, I turn to my left and parked on the street in front of the 99¢ Only Store is a dilapidated 1980’s Ford Econoline van, the side door open revealing a very dapper, charismatic guy inside singing “49 Bye Byes” by Crosby, Stills, Nash & Young on a beaten-up upright piano. The piano fits so perfectly within the van, it’s as if it were an accessory purchased from the dealer, its side cleverly painted with school-green chalkboard paint bearing the words “Tips Appreciated” punctuated by the upturned mouth of a smiley-face.

I immediately start rolling Super 8mm on my iPhone 5. “Do you know any Daniel Johnston songs?” I ask. “No. I love the guy and I’ve actually been called ‘the Daniel Johnston of Piano’… in the van, but I do know a lot of indie rock. I played in a pretty famous indie rock band. You ever hear of Silver Jews?” I reply, “Yes. David Berman.” He then launches into an amazing heartfelt rendition of “We Are Real” from their landmark LP American Water and proudly tells me “I’m on this record.”

I quickly learn that his name is Chris Stroffolino and he is not only a Silver Jew, but also a Ph.D. holding Shakespearean scholar and published author of no less than eight books of poetry. For reasons that are still fuzzy to me, he is disabled from a bicycle accident, walks with a cane, has recently fled San Francisco (and a relationship with a woman) and landed homeless on the streets of Los Angeles, living in this crazy van with a rescued piano that he’s ingeniously bolted to the chassis. As I listen to his patter and the music pouring out of the van it becomes clear that he is blessed and cursed with the same affliction as the subject of my documentary The Devil and Daniel Johnston.

Flash forward to a week of spontaneous piano-driven street karaoke outside his van door: “Mony Mony” by Tommy James, “Red Rubber Ball” by The Cyrcle, “Baby It’s You” by Burt Bacharach via The Shirelles, “Lisa Says” by The Velvet Underground – the Live 1969 long version with all the cool parts, Richard Hell’s “Time,” “Stand” and “Everybody’s A Star” by Sly and The Family Stone, The Animals, Metal Circus era Hüsker Dü, obscure Lou Reed-style David Bowie on “Queen Bitch,” and Roxy Music. And my beloved early Kinks — killer Kinks covers! – all performed in the Vons Supermarket parking lot on Sunset (a fave spot of his for tips it seems). The proto-punk gem “I’m Not Like Everybody Else,” “Everybody’s Gonna Be Happy” and “Dead End Street,” the lyrics all delivered with a poignancy that Ray Davies could never have imagined. Truly heart-breaking and optimistic at the same time.

Another chilly night, Chris lights off an 80’s nostalgia bomb with a set of early Replacements tunes (he’s wearing a Let It Be T-shirt under his jacket and scarf) from their first Twin/Tone LP Sorry Ma, Forgot To Take Out The Trash. “Hangin’ Downtown” is re-imagined as a rollicking honky-tonk ditty and the Paul Westerberg down-and-out classic “Here Comes a Regular” literally brings tears to my eyes. I had a friend with me and we agreed that singing along to these songs with Chris, while standing outside his magic van under the halogen lights, is about as much spontaneous fun as you can have in Los Angeles. I’ve always loved experiencing music outside of the traditional club venue and Chris’s street karaoke takes the performance intimacy quotient to a whole new level.

I soon discover that Chris’s talent goes beyond covers. Over the course of five evenings, I take Chris and his Piano Van up to the parking lot behind the old carousel in Griffith Park. It’s there, under the stars, in the cold, among the trees and the occasional car of teenagers looking for privacy, that I record (in the spirit of Alan Lomax’s field recordings) thirteen of his original compositions of unrequited love – songs I’ve come to adore and sing along with as much as the covers that he and I grew up listening to. “Break Up Make Up,” “Make It Rain, and “I’m Not Going Astray” sound like they’ve always been a part of my life and I credit that to our shared love of what Chris has chalked upon his van door – “Indie, Punk, Motown, Brill Building, and Velvets.”

The album will be titled The Piano Van Sessions and a few tracks are currently available on Bandcamp as well as a selection of single-take Super 8mm videos I directed which are posted on YouTube. I hope this will cause Chris’s @Piano_Van daily tweets (of his roving Pied Piper-like location) to ignite a street karaoke phenomenon.

In addition, my friend and former manager of Daniel Johnston, Jeff Tartakov, will manage Chris (the first artist he’s agreed to work with since Daniel Johnston) with the goal of getting him a proper publishing deal, a record label, and hopefully enough success so that he no longer has to live in his van. 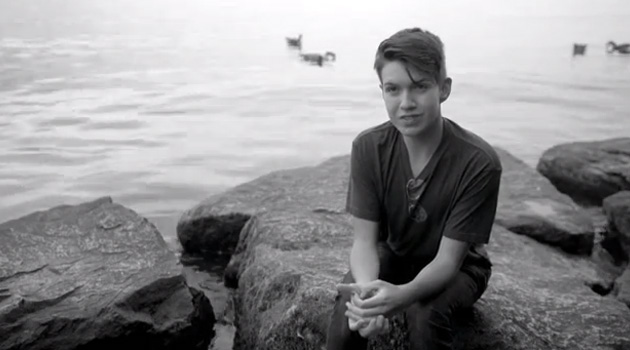 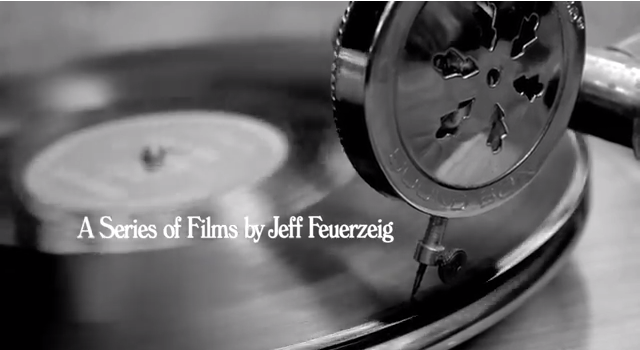 Pride Toronto and Google+ have teamed up with renowned documentary maker Jeff Feurzeig (the Devil and Daniel Johnston) to create a series of documentaries for this year’s Pride Week.

Together: Stories by Pride & Google+ profiles a diverse cross-section of Toronto’s LGBT community. Everyone from Hugh & Gerald, a couple who marched in Toronto’s first Pride Parade in 1972, to drag queen, Jonathan.

Our favourite might be Connor’s story. An interview with a 17-year-old teen who came out just days before Feurzeig met up with him. And if you’re wondering why that voice at the end of each video sounds familiar? That’s Magnetic Fields frontman Stephin Merritt lending his warbling to the series.

That video and the rest of the Together series are below. You can also get the latest from the Pride Toronto organizers on their site or their Google+ page. The organizers have also put together a list of Canada’s top LGBT voices on the social network.