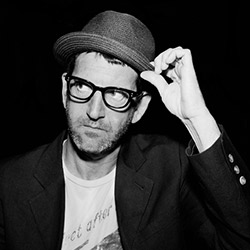 Jeff Feuerzeig is an award winning director and non-fiction filmmaker whose feature film The Devil and Daniel Johnston won top documentary directing honors at the 2005 Sundance Film Festival and was distributed theatrically by Sony Pictures Classics. The film, which has developed a large cult following, is a compelling portrait of a schizophrenic musician and outsider artist who overcame his private demons — many of them quite literal in the subject’s own mind — to develop an avid international following. Combining techniques drawn from the documentary canon (Feuerzeig has worked with Albert Maysles, and others) and the New Journalism of the 1970s (the creation of first-person POV and internal monologue through audio cassette letters, journal entries, home movies, etc.), the film presents one of the finest portraits available of what writer and clinical psychologist Kay Redfield Jamison has labeled the artist “touched with fire,” and the connective tissue that links genius to madness.

“A true nonfiction film, a movie that tries to do with sound and image what journalists like Nick Tosches (Dino) and Norman Mailer (Armies of the Night) tried to do with prose, bending prose into poetry to find a more subjective route to truth.”

Coming out of the fertile early ‘80s punk and independent music underground and its pervasive do-it-yourself aesthetic, Feuerzeig began his career as a film editor before successfully transitioning to commercial directing. In 1993, his independently produced and self-financed first feature Half Japanese: The Band That Would Be King, a loving documentary portrait of the cult band, was distributed theatrically in art-house cinemas nationwide, expanding a personal passion project into a humorous yet ultimately heartfelt valentine to the kind of fringe artists who often deserve but rarely receive anything like it.

As Stephen Holden wrote in the New York Times,

“But underneath [this] pose burns a fiercely anti-establishment passion and an anarchic teen-age spirit that insists on the ultimate value of noise for noise’s sake.”

In 2011 Feuerzeig directed The Real Rocky, a one-hour documentary special for ESPN Films acclaimed 30 for 30 series, about boxer Chuck Wepner, who in 1975 went 15 rounds with Muhammad Ali and inspired the Sylvester Stallone film Rocky. He also directed The Dude for USA Network’s “Character Series”, an 18-minute documentary short about Jeff “The Dude” Dowd, a legendary producer’s rep who became the basis for the Coen Brothers’ cult film The Big Lebowski. In 2012 The Dude was selected as a Vimeo Staff Pick and became a viral sensation across the internet.

Continuing to push the boundaries of non-fiction, Feuerzeig has written the screenplays God Bless Tiny Tim (with Julien Nitzberg), a feature biopic about the legendary crooner of “Tiptoe Through the Tulips” fame and Chuck (with Jerry Stahl), a feature biopic based on his documentary The Real Rocky. Chuck, starring Liev Schreiber and Naomi Watts was released theatrically in 2017.

Feuerzeig recently completed the feature length AUTHOR: The JT LeRoy Story for A&E Indiefilms, Ratpac and VICE, which goes deep inside the curious case of the onetime literary “It” boy sensation who was outed by New York Magazine and the NY Times in 2005 as Laura Albert, a 40 year old former punk rocker and mom from Brooklyn. The film premiered at the 2016 Sundance Film Festival and was acquired by Amazon Films which released it theatrically. In 2017 Feuerzeig was a writer and consulting producer on the Johnny Paycheck season-one pilot episode of Mike Judge Presents TALES FROM THE TOURBUS as well as two George Jones & Tammy Wynette episodes.

Jeff Feuerzeig directs Jeff "The Dude" Dowd on location in Tampa for THE DUDE (2011).

Jeff Feuerzeig and Chuck "The Bayonne Bleeder" Wepner at the premiere of THE REAL ROCKY in Philadelphia (2011).

Jeff Feuerzeig on location with Daniel Johnston in Waller, Texas for THE DEVIL AND DANIEL JOHNSTON (2005).

Jeff Feuerzeig on location with Jad Fair in New York City for HALF JAPANESE: THE BAND THAT WOULD BE KING (1993).