We are inundated with products and ads every holiday season, with each more intense than the year before.

You know it. We all know it. Even the marketers know it – which has led Nokia to switch course.

Ads? Product? Sales? Um, how about short film instead — where there’s an actual storyline and no real sales pitch?

Roll “Holiday Realness.” The series features three films with holiday spirit that has little to do with, well, any of the Christmas-themed ads on TV or the Internet.

Once chronicles canine-obsessed people celebrating Christmas with their dogs. Another follows extreme Christmas carolers who go door to door at 3 a.m. The third is a valentine to surfin’ Santas and 1960s garage-rock legends, the Sonics.

“Traditional advertising has changed. These are not standard spots; in each case, there is nothing really being sold,” says Jeff Feuerzeig, the Los Angeles-based filmmaker that directed the series. “These are mostly unscripted stories about real characters, which is exactly the kind of work I love doing.” 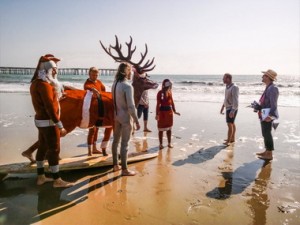 “Surfin’ Santas” is different from most ads, because it’s not really an ad. The short film — by filmmaker Jeff Feuerzeig, far right — has no sales pitch. It’s a film with a story, and part of a new trend in advertising.
Lucas Celler.

You might know Feuerzeig as director of Sundance award-winning documentary “The Devil and Daniel Johnston” or the popular ESPN film “The Real Rocky.”

Not exactly the ad man type – but that’s the point.

Companies are increasingly financing short films that have little to do with their products. Acclaimed filmmakers such as Albert Maysles have done long been involved with corporate work – films that are more than mere ads.

Earlier this year, German master Werner Herzog directed a chilling documentary on the hazards of texting, “From One Second to the Next,” that was financed by telephone companies AT&T, Verizon, Sprint and T-Mobile.

“More and more filmmakers are involved and they’re being given the freedom to tell a story,” says Feuerzeig, via phone from Los Angeles. “No one is going to spend 30 seconds watching an ad online, but it’s different if there’s a story.”

“Dove Real Beauty Sketches,” released in April, became a viral hit – getting 61 million plays on Youtube. The film features a forensic sketch artist sitting behind a curtain that draws the faces of women – one based on the woman’s self-description; the other based on description provided by friends. The objective is to show that women are more beautiful than they see themselves.
The short is considered a breakthrough for this segment of advertising – one that parallels the use of music in TV shows and movies, to connect with viewers and listeners on a level that goes beyond the hit-‘em-over-the-head approach of the past. The trend has provided an ancillary income to musicians and filmmakers facing an uncertain future in the free-download 21st century.

It’s going to continue to grow, as companies try to cultivate credibility and authenticity to differentiate themselves from one another.

“Agencies are dedicating more resources to longer form content,” says Darren Foldes, executive producer of Green Dot Films, which created the “Holiday Realness” films alongside the advertising agency Geometry Global. “More and more, we’re seeing less concern about hard selling to an audience and instead it’s becoming more and more about connecting with and relating to an audience by telling real and meaningful stories.”

Feuerzeig’s reputation as a straight-on filmmaker brought not only credibility to the brand, but also artistic freedom. There was a premise – to do non-traditional Christmas stories – but little input beyond that.

“I went through countless possibilities, but I picked the subjects that I wanted and found most interest, people you wouldn’t expect to find in ads,” says Feuerzeig. “I’ve always loved the Sonics and thought their song ‘Santa Claus’ was the greatest Christmas song – and loved the chance to make a movie around it.”

“There is a lot of creative collaboration and freedom, and I have the chance to insert myself into and craft so many unique off-the-radar stories,” adds Feuerzeig. “This isn’t a traditional ad, because I can’t pinpoint what exactly is being sold, other than a story – and telling a story is what filmmaking has always been about.”