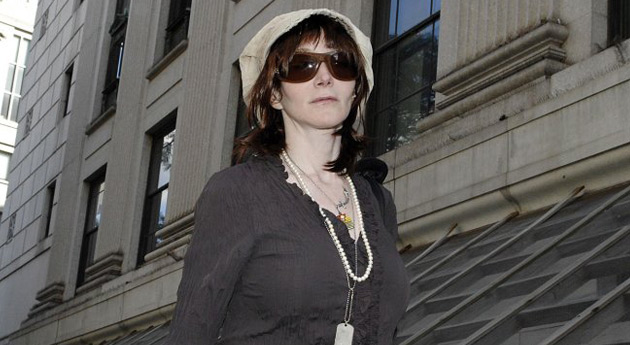 The story of what many have labeled the first literary hoax of the 21st century is getting the documentary treatment.

A&E IndieFilms and Brett Ratner’s RatPac Documentary Films are teaming up with youth media company Vice to produce a documentary telling the story of author Laura Albert and her infamous persona JT LeRoy.

Jeff Feuerzeig, who made the 2005 documentary The Devil and Daniel Johnston, wrote the script and is directing the feature, which is currently in production.

LeRoy burst onto the literary scene in the mid-to-late 1990s and had his first novel, Sarah, published in 1999 when he was only 19 years old. That same year also saw the release of his novel The Heart Is Deceitful Above All Things.

With a dark backstory that included being a transgender prostitute, he quickly gained a following and celebrity status. Lou Reed and Garbage frontlady Shirley Manson were supporters, as was Gus Van Sant, who had LeRoy pen an early draft of his movie Elephant.

The literary and media community were stunned, however, when in the mid-2000s it was revealed that LeRoy was actually Albert, a middle-aged musician and former phone sex worker. Albert wrote the works and had her husband’s half-sister act as LeRoy for public appearances. Lawsuits were filed and Albert was shunned by those close to her.

Feuerzeig has unique access to Albert’s extensive archives and is looking at the subject’s own history, posing the question of whether LeRoy is a fraud, a postmodern masterpiece or something else?

“The story of J.T. Leroy is so wild, fascinating, and thought-provoking that it’s a classic example of something you couldn’t have made up,” said Ratner. “We are certain that people will be discussing and debating the movie for a very long time.”

“As the celebs glommed on, and the stories got weirder and weirder, we were totally hooked. Then the whole thing imploded and in a flash the community withdrew their support and Laura Albert’s real story was buried,” said Moretti. “Jeff is going to tell a deep, twisting, twisted, tragic-comic human drama and along the way turn the mirror on the artist and media community as well.”

Albert choked up at the Sundance Q & A for Jeff Feuerzeig’s fascinating portrait of the damaged writer behind JT LeRoy. 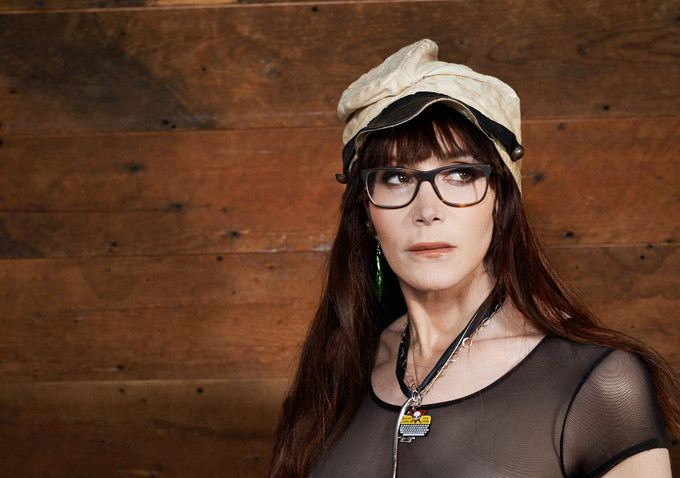 I sat in the Amazon Studios row at the Park City Library with execs Roy Price, Ted Hope and the Amazon team, who are finalizing a deal to acquire their first documentary pickup, “Author: The JT Leroy Story.” Backed by A&E IndieFilms, Brett Ratner’s RatPac Documentary Films and Vice, writer-director Jeff Feuerzeig’s documentary weaves in and out of the mind of novelist Laura Albert, who finally steps forward to explain why she created several alternate personas, including novelist JT (Jeremiah Terminator) LeRoy.

Marie Therese Guirgis, Head of Documentary at Ratpac Entertainment, read Feuerzeig’s project proposal two years ago, “one of the most brilliant I’ve ever read,” she told me on the phone. “We jumped right in, it all came together with Vice and A & E. It’s been a long crazy journey.”

Albert’s many personas started first as characters on the written page, then as characters she would deploy on the phone. Some she played herself, others were taken on by her musician husband Geoffrey Knoop and his sister, Samantha, who played LeRoy in public.

As always, past is prologue, and Albert couldn’t have concocted many of the narratives in “Author” (her novel “Sarah” and short story collection “The Heart Is Deceitful Above All Things” were published in 1999) if she hadn’t suffered some dramatic abuse herself, with a single, promiscuous mother and others who neglected her in various ways, sending her in and out of mental hospitals and group homes. She coped by writing down her vivid fantasies. The film reenacts her playing with her Barbie dolls, naked and upside down, bloodied and maimed.

Feuerzeig reveals her back story in various ways, aided visually by Asia Argento’s film adaptation of LeRoy’s “The Heart is Deceitful Above All Things,” in which the director played LeRoy’s mother, a truck stop prostitute. Albert’s persona Speedie, an Australian assistant/manager to LeRoy, had to take a step back when the fetching young author/Knoop, who had announced he was undergoing a sex change, embarked on a sexy affair with Argento.

The movie lays bare that Albert herself was an ordinary looking fat girl who intuited that people, whether suicide hotline shrinks — one talked to her for years about her multiple personalities — literary agents, publishers or celebrities, would take her more seriously if she was male. LeRoy was a voice, a character inside her, and when Albert’s books took off, she first had celebrities fill in at readings for the shy writer (while she sat in the audience) and then dressed up Samantha Knoop, the sister of her husband, in a blonde wig and glasses. It worked like a charm.

Albert narrates the story, sometimes as herself, and often in voiceover as LeRoy. The most amazing thing that Feuerzeig was able to do was use all the telephone audio and video tapes Albert saved of many, many conversations, including with Gus Van Sant — who flirted with adapting “Sarah” and based “Elephant” on Albert’s uncredited screenplay — and Courtney Love, who talks about doing a line of coke on the audio.

LeRoy’s celebrity allure is another aspect of this story, as they were attracted to him like a moth to flame, from Winona Ryder and Matthew Modine to Shirley Manson and Bono. Of course in 2005 when the media investigated various hoaxes that arose about who LeRoy really was, his celebrity friends felt betrayed and angry, and Albert withdrew from the fray, supported by the chums who had divined her secret: “Smashing Pumpkins” frontman Brian Corgan and David Milch, who had hired her to write on “Deadwood.”

Feuerzeig was intrigued when a friend turned him onto the story, which was reported at length in Vanity Fair, Rolling Stone, Salon, The New York Times and New York Magazine, “these amazing massive pieces by great journalists who weighed in on the story,” he said at Sundance. “But one voice was glaringly missing from all this journalism: the voice of the person who wrote these books, a voice I’d love to hear.” 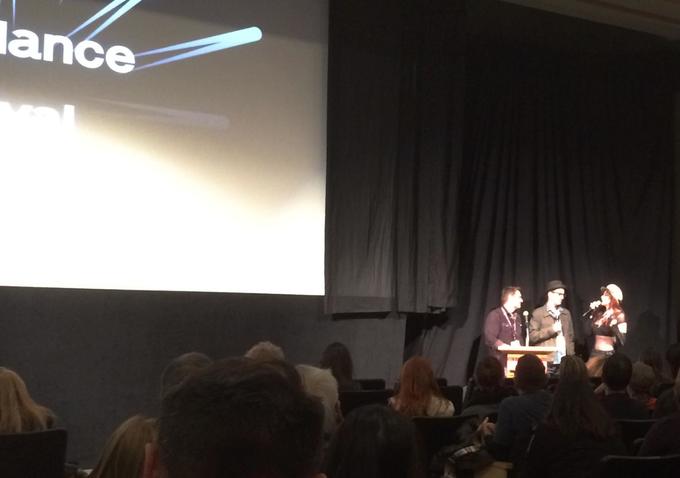 He reached out to Laura Albert, who checked out his 2005 film “The Devil and Daniel Johnston” and agreed to talk. She told him she liked two things about him: “You’re Jewish and you’re punk rock.”

Feuerzeig went out of his way to not judge her: “I wanted her to tell it, it’s a very subjective film, the theme of fiction and where does fiction come from came out of my research. It meant a lot to me to go deep into why did this happen and try to understand it, her back story, which was never told, and she shared that. That made me think about where fiction comes from, and writing; I write, have friends who write, anyone who has ever written channels voices and characters male and female.”

The director was impressed with two POV docs with unreliable narrators, “The Kid Stays in the Picture” and James Toback’s “Tyson,” as well as Jerry Stahl’s Fatty Arbuckle novel “I Fatty.” “Those are singular, strong choices,” he said. “Sometimes perhaps you want an outside perspective. I respect directors who stick to this idea of a story told in a singular voice. Everybody complains that they hate talking head documentaries: then don’t make one!”

Feuerzeig uses animation to bring some of Albert’s JT LeRoy stories to life, and did massive amounts of research, digging into Albert’s archive, “the largest on the planet, there’s nothing not saved. I went through it carefully. I tried to make sense of it for myself. Hopefully I will be able to tell it, it’s so complex, with layers of understanding. The onion kept unfolding, even watching it tonight, there are things I’m still discovering — what happened in the layers of her heart, all these great stories are hidden in the books, I had to find those pieces and work them into the narrative, like finding Paul is Dead on Beatles recordings.”

Clearly, the process of collaborating on the film has made it possible for Albert to continue the work in progress that is growing into her own body, so that her voice is her own. “This is a ‘This is Your Life’ moment,” she said as she joined the conversation after the first Sundance screening. “It’s such a complex opening. It’s difficult. An amazing night.” She chokes up. “This will take a lot of therapy to process.” She cited David Milch, who advised her to “give yourself over to the process of life.” “David Milch told me to shut the fuck up, I had to learn to do that,” she said. “Whenever there was pain I would eat. Whenever I needed to tell something I needed to go to another [persona]… If I could have I would have. I couldn’t turn this body into a boy.”

She thanked Feuerzeig for using his “craft and technique to allow me to come face to face with the story. I have a lot of loving people around me, who held my hand through the entire process. It’s a complex story, it could make a television series, this is like a piece of me. It’s phenomenal to be here. People laughed at shit I found funny. That’s really cool. It’s amazing to see people open to finding me.”

Feuerzeig “got hold of my paradigm,” she said. “Being Jewish was important, a certain way of being, there’s a way of rejecting societal norms or standards. My motives were not the motives attributed to me. I had somebody looking at it from the outside, who I felt I could trust. I trusted his artwork and his genius, I was grateful I didn’t have to do it, I was so down deep stuck in the hole I needed someone to get me out, I did not have the ability to get myself out.”

Thanks to the movie Albert feels safe again, and is writing a memoir, she said: “That to me is the biggest gift of this, I’m writing again, and I didn’t think that would happen. When everything gets crazy and I get into my shit, all this helps me to come more into myself. When I get to that point, I have a tool to write in an ordered universe that makes sense. Now I am going back and writing a memoir. It’s phenomenally powerful. I always had a directive. I don’t completely understand what I am here to do, but I know it’s of service. I hold so many peoples’ stories, from the group home and all the people I went through institutions with — ‘tell my fucking story.’ I can’t be bought, I know what I am here to do. By any means necessary it will get done.”